Simple Network Management Protocol (SNMP) is a standard application layer protocol used to manage, monitor, and communicate with the devices connected on a network. SNMP collects data in a standardized way from all devices that run on different software and hardware, making it an important part of interoperability between both the monitored and monitoring systems.

SNMP protocol is an application layer protocol defined by the Internet Architecture Board in RFC1157. SNMP is used to exchange management information between network devices. It is one of the most common protocols used for network management. SNMP is part of the Transmission Control Protocol/Internet Protocol (TCP/IP) suite as defined by the Internet Engineering Task Force.

Why do you need SNMP monitoring tools?

Network admins generally manage the devices in a network and allocate and free up ports and interfaces to ensure continuous uptime and bandwidth-hog-free network operations. Closely monitoring SNMP devices is a major part of this. SNMP monitoring requires an admin to configure the SNMP agent to send the monitoring data to an SNMP manager. Since the network management tool takes care of monitoring, admins can focus on performing corrective measures.

SNMP monitoring tools are necessary to:


Based on the insights provided by these tools, admins can track the availability and performance of SNMP network devices and pinpoint issues to maintain their network's health. The ideal SNMP monitor tool monitors different versions of the protocol and helps IT admins get a complete picture of their entire network environment. SNMP monitoring software also provides the captured data in intuitive formats like dashboards and graphs.

How does SNMP work?

Traffic flows across your network from different sources. SNMP communicates with the whole network and the devices in it. As mentioned earlier, SNMP is preconfigured on devices, and once the protocol is enabled, the devices will store their performance stats. Each network server will have multiple MIB files. The device MIB files are queried to fetch the monitoring data. The working of SNMP revolves around its components, wherein each component contributes management of resources.

SNMP works by sending protocol data units, also known as SNMP GET requests, to network devices that respond to SNMP. All these communications are tracked, and network monitoring tools use them to fetch data from SNMP.

What are the components of SNMP?

The components of an SNMP-managed environment include an SNMP manager, its managed devices, an SNMP agent, and a management information base (MIB), all of which play a crucial role in its architecture.

The SNMP manager is the central system used to monitor the SNMP network. Also known as a network management station (NMS), an SNMP manager is responsible for communicating with the SNMP-agent-implemented network devices. It runs on a host on the network. The manager queries the agents, gets responses, sets variables in them, and acknowledges events from them.

A managed device is an SNMP-enabled network entity that is managed by the SNMP manager. These are usually routers, switches, printers, or wireless devices.

An SNMP agent is a software process that responds to SNMP queries to provide status and statistics about a network node. SNMP agents play the most important role in management. They are locally located and associated with SNMP network devices from which they collect, store, and transmit monitoring data. Data is transmitted to the designated SNMP manager when queried.

A management information base (MIB) forms an integral part of network management models.

An SNMP MIB is a structure that defines the format of information exchange in an SNMP system. Every SNMP agent maintains an information database describing the parameters of the device it manages. An SNMP manager is a software system that uses SNMP to collect data for fault management, performance management, and capacity planning. SNMP managers store collected data in a MIB as a commonly shared database between the agent and the manager. MIBs are saved as a text file in a specific format that MIB editors, SNMP agent builders, network management tools, and network simulation tools can understand, facilitating network building, testing, deployment, and operations. The managed objects in an MIB are called object identifiers (object IDs or OIDs).

Object Identifiers (OIDs) are identifiable by strings of numbers separated by dots. There are two types of managed objects:

MIBs organize OIDs hierarchically, which can be represented in a tree structure that has individual variable identifiers for each OID. This tree structure contains all the manageable features of all products arranged in it. Each branch of this tree has a number and a name, and each point is named after the complete path—from the top of the tree down—that leads to that point. 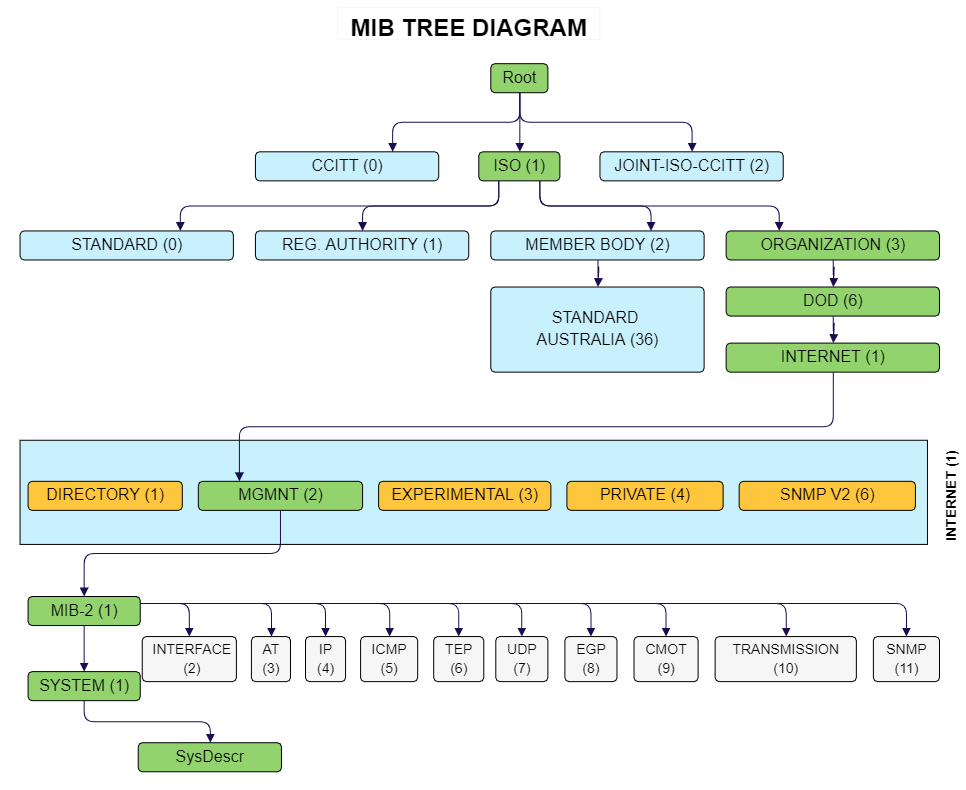 To provide an example from the diagram above, the OID of sysDescr is ".1.3.6.1.2.1.1.1", which can be found by following the path of green points from ROOT to sysDescr:

There are three versions of SNMP: SNMPv1, SNMPv2c, and SNMPv3.

SNMP messages, since they are part of the TCP? IP suite, are bundled and transmitted by the User Datagram Protocol (UDP). The following image is an example of such communication.

An SNMP trap is any event generated and sent by a device and received by a trap receiver whenever a change of state or anomaly is detected. These event messages generated by devices are received by a network management system. This means that fault-finding is automated and you'll be notified of anything that fails instantly. These trap messages are generally encoded, and a trap processor is required to decode them.

How can Site24x7 help in monitoring your network?

Configure SNMP agents on your network servers so that they can export monitoring data to the network management system.

What are SNMP devices?

An SNMP device is a device that is managed using SNMP. Most common network devices, like routers, switches, firewalls, load balancers, storage devices, UPS devices, and printers, are equipped with SNMP. The vendors preconfigure the SNMP agent, and the admins simply have to enable SNMP to start managing the device.

Why is SNMP important?

Network management is crucial to ensure the proper functioning of different network components. SNMP follows standard protocols and procedures for data collection and communication and is proven to be the best solution for network management—and a simple one at that.

What is an SNMP port?

Can SNMP v2 and v3 coexist?

Yes, SNMP v2 and v3 can coexist. In a typical management scenario, the network management system communicates with SNMP agents of different versions. A multilingual agent, which supports all three versions, can coexist with other agents that support only a single version. This is defined in RFC 25.

This coexistence is more commonly used while migrating from v2 to v3. Once migrated, it is recommended to disable the older versions and use the stable and secure SNMP v3.

What are SNMP community strings?

Community strings are used only by devices that support SNMP v1 and SNMP v2c. Since SNMP v3 is highly secure, it uses username-password authentication along with an encryption key instead of SNMP community strings.

There are three types of SNMP community strings:


What is an SNMP table?

An SNMP table is an ordered collection of objects consisting of zero or more rows. Each object in a table is identified using the table index and can have a single index or multiple indices.